The homepage of Chris Parlette

Living with type 1 diabetes is extermely tiring, both physically and mentally. It's a disease that can be controlled, but doing so requires constant decisions to be made about food, activity, medication, and countless other factors. Making one decision poorly usually just leads to an additional factor to be considered in the next decision. Making multiple decisions poorly leads to feeling crappy. Making a lot of bad decisions (or no decisions) for years leads to physical deterioration and all the scary things that my doctors warned me about when I was a kid. Medication and technology have made this easier over time, but it still requires constant vigilance just to maintain any sense of normalcy.

Without a cure (there's a joke in the diabetic community that a cure is always just 5 years away), this is just how my life is. I don't say this to ask for pity, as I've accepted this as my daily task for the rest of my life, but I think it's something that is hard to grasp if you don't have a lifelong disease. I try not to let diabetes run my life or define who I am, but the flip side of that is that it is a constant thing I deal with and can be a part of other decisions and opinions of mine. My hope is that this might partially explain that to non-diabetics.

What Is Type 1 Diabetes?

I was diagnosed with type 1 diabetes when I was three years old, which means I've had it for 32 years. Since I don't remember really anything from ages 0-3, it's as if I've always had it. My immune system attacked my pancreas for reasons unknown, causing it to not make insulin like Normal People. I inject insulin to lower my blood glucose levels to try to stay in the BG range of Normal People.

From ages 3-13 I injected both medium-acting and long-acting insulins multiple times a day. In 8th grade I was approved for use of an insulin pump, which gives a constant flow of short-acting insulin throughout the day through a tube to an infusion site under my skin. I can also tell the pump when I've eaten something, so it can give a larger bolus of insulin to match the food digestion. A few years ago, the company that makes my insulin pump came out with a blood glucose monitor that will show near-real-time graphs of my blood glucose, which can trigger more or less insulin to be delivered. 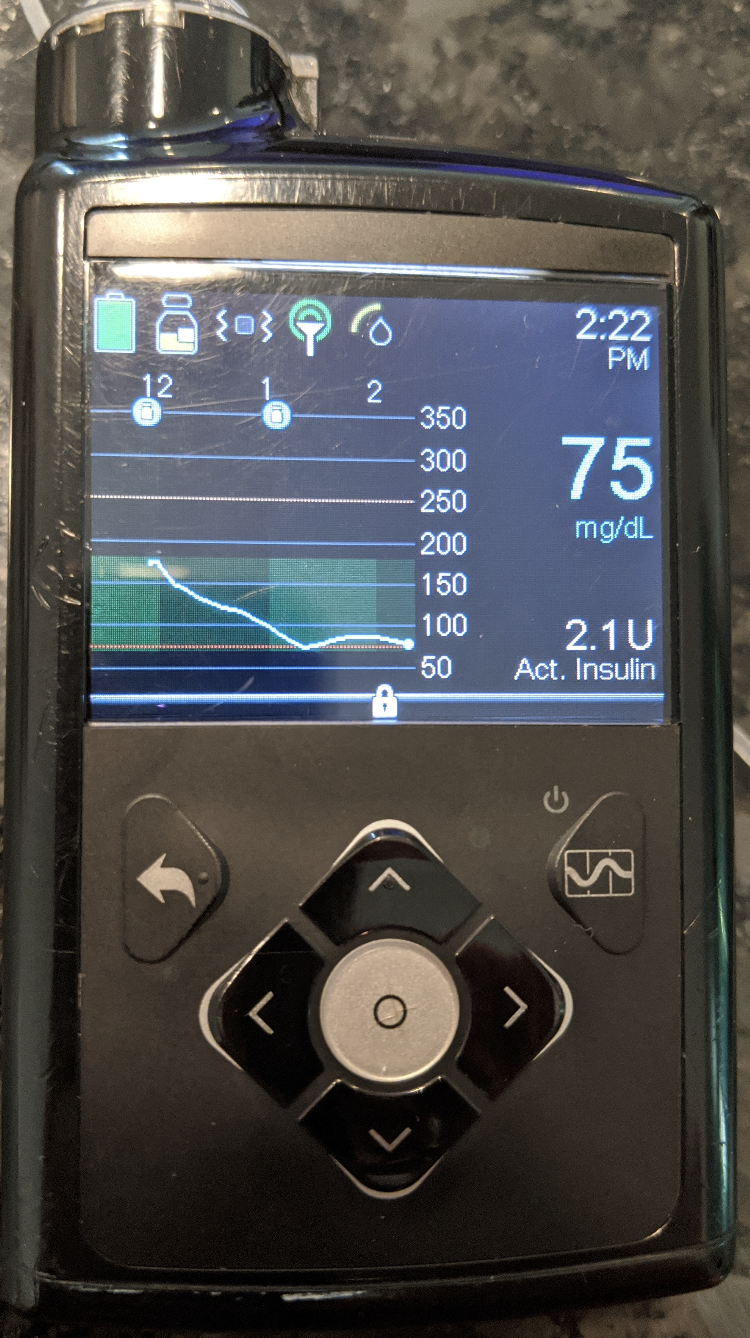 My main goal in the quest of keeping my diabetes from giving me physical problems in both the near-term and long-term is to keep my blood glucose levels stable in the range of about 70-150 mg/dl (milligrams of glucose per deciliter of blood). Lower than 70, and I start to have a "shaky" feeling, my hands and feet get tingly or numb, and my vision starts getting spotty. My body starts to have an "eat everything you can now" response that is very hard to control. Too low and I risk passing out. If I'm higher than 200, I get very tired, thirsty, and sweaty. Too high and I risk diabetic ketoacidosis, and prolonged high blood sugars are the main cause of long-term physical problems.

So, it should be easy, you just track what you eat, right? Unfortunately, there are hundreds of things that affect my blood sugar, though food is definitely the main one. Here's a small list of things that can raise my blood sugar (these are all real, even if they sound like I'm joking):

And here are some things that lower my blood sugar:

Here are a few concrete examples of the decision-making process I've had to go through just in the last week or so.

This past Thursday, I decided I should mow the lawn before it rained on Friday and Saturday. I decided to mow the lawn in the morning before it got too hot and before I started work. Since I just woke up, my blood sugar was sure to start going up, but mowing the lawn (especially on an empty stomach) would just cause my blood sugar to drop rapidly. I knew I needed to eat something, so I made a giant pancake using Kodiak Cakes batter that has some protein in it. The protein will slow the absorption of the carbohydrates, so I was hoping it would extend throughout the hour it takes to mow. I wanted coffee, but caffiene also raises my blood sugar, so I put some chocolate protein powder in the iced coffee so I could drink that while mowing to spread that out over time as well.

Normally for the 47 carbs I would need 12.3 units of insulin in the morning (since my carb-to-insulin ratio is 3.8 carbs per unit between 6am-10am, it's different throughout the day). However, I didn't want the insulin to go in so quickly before starting to mow, so I chose to override the insulin pump and just do about half the insulin I normally would. I was hoping this would start to work for the carbs, but keep my blood sugar high enough without going too high.

I was wrong. About halfway through mowing, I felt my hands getting numb and it felt like blood wasn't flowing through my arms as well as it should. I knew this meant I was going low, so I checked my BG sensor and it showed I was 54 and had an arrow pointing down, meaning it was still dropping. I knew I needed to eat more, so I went inside and tried to find some fruit, as the fast-acting sugar in fruit would help get my blood glucose up faster. I ate 3 kiwis, which totals about 40 carbs, but I decided to not give any insulin even though I knew my blood sugar might go too high later.

After waiting a couple minutes, I resumed mowing. I was right about my blood sugar going higher later, as about an hour after I was done mowing, my blood sugar was 200 and rising. I decided to give some insulin to correct that, so I let my pump tell me to give 2 units of insulin. This is based on a calculation of how each unit of insulin drops my blood sugar 23 mg/dl (usually, unless I'm too high, but that's a different story) and the pump wants my blood sugar to come down to 150 so it can manage the micro-doses to get it further down to 120. Once it was lunchtime, my blood sugar was still 180, so I decided to eat a lower-carb lunch with some fiber and protein to try to not spike it again.

Wednesday nights are my deadlift nights. I like to work out in the evening, as I'm much more energized and then I can just go to be afterwards. When I know I'm working out, I like to eat a full meal about 1-2 hours before the workout, since carbohydrates and insulin both tend to take an hour to really get into your system. Dinner that night was chicken leg quarters with rice and a spinach salad. The total carbs for that is about 50, which means about 5.5 units of insulin (since my carb-to-insulin ratio after 3pm is 9 carbs per unit). My blood sugar was a little high at 175, which I was guessing was due to a snack I had earlier in the afternoon. Normally I would give more insulin for that, but there was still insulin in my system from the snack, so I decided not to give any more. I also know that my blood sugar usually drops at the start of my workout but rises later, so I took about 10% off the suggested 5.5u so it wouldn't drop too far.

As expected, about halfway into my workout, I saw my blood sugar start to creep up after it had dropped down to 120. I thought about giving more insulin mid-workout, but I was also drinking a lot of water because I was sweating so much. Also, my insulin sensitivity is a little higher while active, so I didn't want to give too much, so I just left it alone. It slowly went up to about 150 near the end of my workout. I knew I was having protein powder mixed in a glass of milk after my workout, so I decided to give insulin for that 20g of carbs about 15 minutes before the workout ended so that it had time to start working. Since my blood sugar was 150, I had a little bit of slop room for that to come down prior to my protein shake, so I wasn't too worried about going low. If it had been closer to 80, I likely would have waited.

Trap bar deadlift 460x7. Last time I did over-double-bodyweight I got 3 reps, so that's progress! Featuring a drop in by Coach Lulu at the end. #homegym #powerlifting #wendler531 #trapbardeadlift

After the protein and for the hour I was awake after that, my blood sugar hovered right around 150, which I was fine with. Stricter diabetics might have wanted that to be lower, but I knew I had protein, fat, and carbohydrates in my system, along with insulin working plus exhausted muscles. Having a flat blood sugar with all of those factors was fine with me, and I'm usually worried the most about going low at night. Having my blood sugar be slightly elevated prior to sleeping is more mentally comforting to me, as the automatic insulin delivery of my insulin pump and continuous glucose monitor should slowly trend that into a perfect range while I sleep. Thus, I decided not to give any more insulin before sleeping.

Those are two small examples, but I hope it gives a glimpse into the kinds of thinking that diabetics have to do around every single part of their lives. I try to stay in that 80-120 range most of the time if I can, but I have to also plan ahead to know if I'm working out, driving somewhere (as I don't want to go low while behind the wheel), sleeping, eating, or even just sitting around.

Cooking at home means that I can weigh and measure food, but eating out means guessing and estimating more than usual. Eating a handful of pretzels is fairly straightforward, but pizza or Chinese food is a rollercoaster of blood sugar and food absorption. In spite of those challenges, I still partake of those things and eat out with friends, because I refuse to let my dumb immune system tell me I can't have some General Tso's Chicken. Just know that if I'm out at a restaurant with you and I miss your question, it might be because I'm making 100 mini-decisions before our food comes.